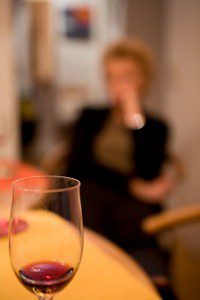 A new study of thousands of Americans finds people with a history of drinking problems have more than twice the risk of memory problems later in life, compared with those who have never been heavy drinkers.

Participants were born between 1931 and 1941. They answered the questions about alcohol use when they were first interviewed, when they were in their 50s and 60s. They were considered to have a drinking problem if they answered yes to at least two of the four questions. They had follow-up memory tests every other year from 1996 to 2010, the article notes.

The 16 percent of participants who said they had a drinking problem at some point in their lives were much more likely to have memory problems later in life. The study appears in the American Journal of Geriatric Psychiatry.

“We already know there is an association between dementia risk and levels of current alcohol consumption – that understanding is based on asking older people how much they drink and then observing whether they develop problems,” lead researcher Dr. Iain Lang of the University of Exeter Medical School said in a news release. “But this is only one part of the puzzle and we know little about the consequences of alcohol consumption earlier in life. What we did here is investigate the relatively unknown association between having a drinking problem at any point in life and experiencing problems with memory later in life.”