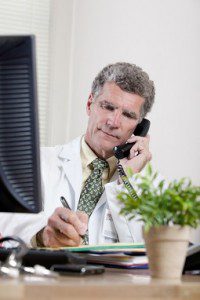 SBIRT is a comprehensive approach for delivering early intervention and treatment services to people with, or at risk of developing, substance use disorders. Healthcare providers using SBIRT ask patients about substance use during routine healthcare visits, provide brief interventions for patients with risky or problem use, and refer patients with severe disorders to treatment.

“We were aware that despite a lot of prior research on the effectiveness of SBIRT, most patients don’t receive it,” Dr. Brown said. “We thought that if we could show it could improve outcomes and decrease costs, more healthcare settings might decide to implement SBIRT for its patients.”

“Currently, many practitioners don’t think reimbursement for SBIRT is sufficient. They think they’ll lose money if they implement it,” he said. That perception may change as healthcare payers move toward value-based reimbursement, Dr. Brown said. He explained that under the Affordable Care Act and the Medicare Access and CHIP Reauthorization Act (MACRA), healthcare is transitioning from a fee-for-service model to a value-based model, in which medical practices receive higher pay if they provide high-quality, low-cost care. Practices that don’t provide such care will lose reimbursement dollars.

SBIRT will also be increasingly attractive to Accountable Care Organizations (ACOs), Dr. Brown predicts. ACOs are groups of doctors, hospitals and other health care providers who come together voluntarily to give coordinated high quality care to their Medicare patients. “For every dollar that an ACO saves Medicare, the organization gets to keep 50 to 60 cents,” he said.

The benefit of SBIRT is that it can help the many patients who are at risk of drug or alcohol problems but don’t need specialized substance abuse treatment, Dr. Brown noted. “Many patients respond well to a brief intervention delivered in a general healthcare setting,” he said.

In the study, patients received SBIRT from health coaches who were hired specifically for this purpose. “Expanding healthcare teams with coaches was intended to address the widely held concern that providers and nurses don’t have time to deliver SBIRT,” he said. The coaches were hired with funds from a state-based grant from the Substance Abuse and Mental Health Services Administration.

In the study, patients were asked to fill out a screening form that included questions about behavioral health, such as drug and alcohol use, smoking and diet. A medical assistant looked over the form, and if it indicated the person might be at risk for drug or alcohol abuse, the coach would talk with the patient. Patients whose initial screening indicated they might be at risk were asked to fill out a longer set of questions. If the assessment suggested the patient was likely dependent on drugs and alcohol, the coach would refer the patient to addiction treatment.

In 90 percent of cases, patients who screened positive initially were not likely to be dependent on drugs or alcohol. These patients were candidates for a brief on-site intervention. The coach would use a technique called motivational interviewing, which is a client-centered counseling style designed to elicit behavior change by helping clients explore and resolve ambivalence.

The coach would ask patients about possible downsides or fears about drinking or drug use. “Then they continued to help patients strengthen their arguments for change,” Dr. Brown said.