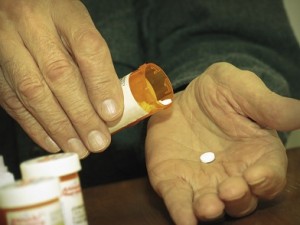 A growing number of the elderly are becoming addicted to prescription painkillers, experts tell U.S. News & World Report. Caretakers and doctors often fail to spot the signs of addiction in older patients.

“The problem is certainly ubiquitous, and often missed, to be honest,” said Dr. Joseph Garbely, Medical Director of Caron Treatment Centers. “Caretakers oftentimes miss the signs and symptoms of a substance use disorder. Doctors do too, and often aren’t asking the questions when seniors are there for their monthly checkups.”

An elderly person who is addicted to painkillers may appear more anxious or depressed, Garbely said. They may injure themselves and appear confused or disoriented.

A recent study presented at the Gerontological Society of America found a 78 percent increase in the number of emergency department visits among older adults who misused prescription or illicit drugs between 2006 and 2012. About 11 percent of the misuse was with opioid drugs, according to lead researcher Mary Carter of Towson University.

Her study included data from more than 71,000 older adults; more than half were ages 65 to 74. “Which means nearly half of the visits occurred among people ages 75 and older,” she said.

Older adults tend to become addicted to opioids through medical treatment for a chronic pain problem, according to Dr. Andrew Kolodny, Executive Director of Physicians for Responsible Opioid Prescribing and Chief Medical Officer of the Phoenix House Foundation. “Some of them have very severe, intractable pain,” he said. “They are able to find doctors to prescribe them all the opioids they might want.”

Older adults who take opioids are at risk of falling and fractures, according to Dr. Caleb Alexander, Co-director of the Johns Hopkins Center for Drug Safety and Effectiveness. Because they tend to take more than one medication, they are also at risk of harmful drug interactions, he added.